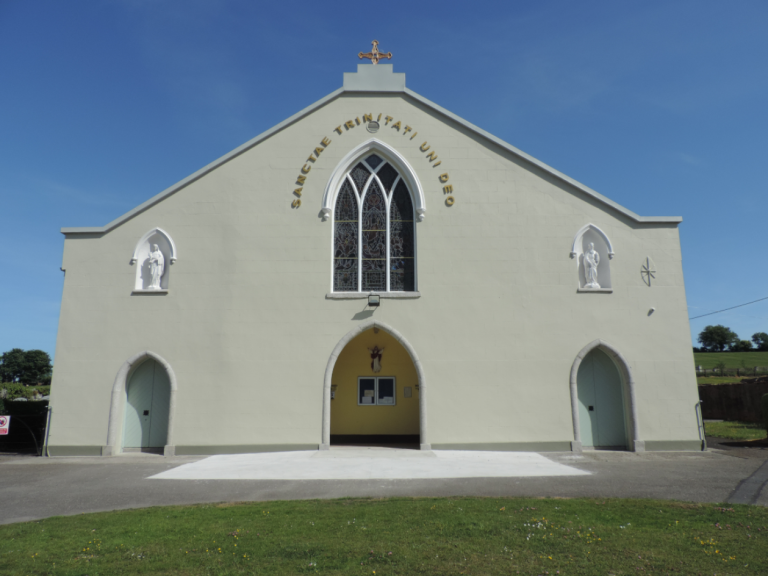 Welcome! While visiting our church we just want to remind you that

It is important that we are kept safe and feel comfortable

The Catholic Church of the Blessed Trinity is a very fine building that dates to the period of Catholic Emancipation. Located in the centre of the village of Moone, the church is of considerable social significance and forms the ecclesiastical or spiritual centre of the locality. Built on a T-shaped plan the church is composed of austere elevations with simple detailing, although visual incident is provided in the form of recessed niches with statuary. The church retains much of its original character, features and fittings and also includes a fine interior that contrasts with the severity of the exterior and has a graceful ceiling with plaster motifs. An unusual feature in the region is the attached presbytery to rear of the building, which also retains an early aspect with features including original small-pane timber sash windows. The church boasts many features of artistic importance, including the stained glass windows to the interior and the cut-stone grave markers to the attendant graveyard. The church is attractively set in its own grounds and is announced on the road side by a fine gateway of locally-quarried cut-granite that testifies to the high quality of stone masonry practised in the locality.

“This mystery [the mystery of faith], then, requires that the faithful believe in it, that they celebrate it, and that they live from it in a vital and personal relationship with the living and true God. This relationship is prayer.”

They Died on This Day

Visit our You Tube Channel