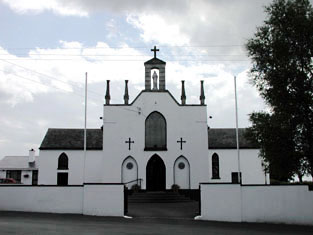 In accordance with Covid-19 guidelines all masses are closed to the public. However, our churches remain open for private prayer, mass is still offered and is available to join via webcam.

Saint Ita’s Catholic Church is an important building due to its age (pre-dating Catholic Emancipation) and due to its inherent architectural significance. Composed on a T-shaped plan the elevations of the church are simple in treatment and rely on the displacement of lancet-arch openings for visual incident. The entrance elevation to north-east, however, is much varied and juxtaposes features such as blind openings and true openings to decorative effect. The gable is furnished with a parapet wall of unusual profile where the bellcote and slender pinnacles add variety to the skyline. The church retains many early features and fittings, including fenestration and a slate roof, while the interior is composed in a simple style in keeping with the treatment of the exterior. The church is prominently set in the village of Kilmead and is of social interest as the religious centre in the locality.

If history did not tell the story, who would believe that – nearly 2,000 years after an obscure Galilean peasant,

They Died on This Day